From the past to the future

The parish of Saint Sebastian lies in East Berkshire, roughly between the small county towns of Crowthorne and Wokingham. The area is mostly forest, much of it Forestry Commission pinewoods. During the last two decades there has been considerable housing development but there is no village centre as such. The centre of the community is the small church of Saint Sebastian and its associated school.

A short history of the area:

Before Wellington College was completed in nearby Crowthorne, in the middle of the nineteenth century, the southern part of the parish of Wokingham had been completely neglected. It was an area of heath and pine woods, with some small farms and the remains of the Roman road, Nine Mile Ride. The people were very poor, living wild in the woods, in tents and small cottages. These people were known as ‘Broom Dashers’ because they made a living by making brooms, which were later, sold in Reading, or sent to Bristol, by barge, to be exported. 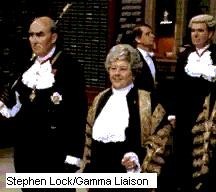 One portion of the Parish lies in a wild and remote district, and contains an increasing population composed exclusively of labourers and broom dashers, who subsist almost entirely by cutting heath on the commons, and converting it into brooms, and who, having for the most part no masters to control them, and no persons of a superior station dwelling among them, stand particularly in need of regular pastoral superintendence, and the want of it must be attended with the growth of irreligion, vice and immorality, and must result in the most deplorable consequences.’

A Petition to Parliament 1846

In 1846, a petition was brought before Parliament, complaining about the parish of Wokingham, and demanding renovation of All Saint’s Church, in Wokingham. It includes a description, necessarily harsh, of the area that is now the parish of Saint Sebastian’s.

There was, however, one large house in the area. This was originally a Royal Keeper’s lodge, as Saint Sebastian’s was part of Windsor Forest. In 1860, the house was bought for a gentleman’s family, the sawyers. The house was re-named Ravenswood. It was Major Sawyer and his family who worked to create the Church and School for the ragged heath people, gradually taming the area until the ‘broom dashers’ disappeared.

The founding of the Church and School:

In 1862, Major Sawyer gave up a cottage on the estate, and the two rooms were knocked into one to form a small day school. He engaged a teacher and her sister, from Binfield, described by Mrs. Sawyer as ‘a respectable young   woman’. No child was allowed to go to the   school unless they also came on Sunday   afternoon when the older boys were also   encouraged to come. The older class   became a separate class, held at Ravenswood, after a while. The Bishop of Oxford gave Major Sawyer permission to read Evensong, so on Sunday afternoons, when lessons were over, a service was held. Mrs. Sawyer describes the scene:

"The little schoolhouse… was crowded and  often overflowing, the smaller children having to make way for their elders, and learn to sit quietly in the classroom, joining in audibly at a distance in the Lord’s  Prayer.’

Afterwards gingerbread biscuits were given to all the children. After a year, Major Sawyer was helped by the Rev. W. Fulford Adams who came from Wokingham to read the services. The Rev. Adams continued to do this even after Saint Sebastians Church was built in 1864 and the Rev. C. Austin followed him. So, in only two years, the Sawyers had established a school and begun to convert the Broom Dashers to Christianity.

The little day school, begun by the Sawyers, in 1860, soon thrived and grew. Little is known about its early history but at some time it moved to the larger building where it is located now. It is believed that the school was built, and the children moved in, around 1874 or 1875. This building was next to the church, built in a similar style, with red brick, and in a simple barn shape. There was only the one room, with a partition in the middle.

The following account is taken from a letter written by Mr. F. Herridge who was a pupil at the school as a boy, leaving school in 1903.

e turn of the century, Mr. Gough and his sister ran Saint Sebastian’s. Mr.  Gough had been a sergeant in the volunteers, who were a voluntary army in  the Boer War. He still had a military outlook and Mr. Herridge comments:

“In the very cold weather, and two to three feet of snow, we had an hour  marching round the playground from 10am to 11am.”

The church was then, as it is now, was very connected with the life of the school. The Vicar, who at that time was Mr. Turner, took the higher classes (eight to eleven year olds) for scripture for an hour every morning. Miss Smith, whose family now lived at Ravenswood, used to take the schoolchildren for Sunday school each Sunday morning, afterwards they were marched round to the Church. On Ash Wednesday, and on Ascension Day, everyone went to church at 11am from school, and then had the afternoon off.

At Christmas, the school choir went carol singing visiting, among others, Howard Palmer at Heathlands. At this generous house they received:

At another stately home in Easthampstead they were given the same but regretfully:

“It was four miles to walk each way.”

Also, at this festive season, Mr. Palmer gave the school a big Christmas tree, with presents under it for all the children in the Parish. The tradition of donating a Christmas tree to the school continues to this day, kindly donated by the Frost family of Nine Mile Ride.

The only heating in the large room was one coke stove. In the winter, the  partition was taken down, to make one big room, and the stove was placed in  the middle. Those children who brought their dinners to school, who were  those  who lived too far away to go home for lunch, were allowed to sit round  the  stove. In the summer they were not allowed into school at all at lunchtime.

When the Speech Day was held at Wellington College:

“The schools from round about were used to line the drive, to see Queen Victoria go by, drawn by six grey horses.”

The day was then celebrated in fine style with no school. On the day of the coronation of King Edward, a bullock was roasted in the Market Place, in Wokingham. All the local schoolchildren:

“Sat down to roast beef, and each one received a mug with the King and Queen on.”

There were also the disadvantages of a school in the middle of a large area of forest. Mr. Herridge recalls that he:

“Carried beer for the men when there was the big heath fire, from the Who’d a Tho’t it public house, next to the school. The school was always closed when a big smoke was seen coming that way.”

Every Monday, the girls learned to sew and knit, and: “The boys who wanted to learn were able to go along too.”   Every child was also taught to swim. There were no swimming pools, of course, so the whole school would go down to Heath Pool for a swim. This was a small lake, about a mile from the school, in the middle of the woods. Mr. Herridge remembers that each child was taken to the island in the middle, and then made to swim back alone. One or two of the bigger children would watch them if they went out of their depth. In this pleasurable way, the whole school soon learned to swim.

The little school was very much part of the local community. The people, still poor, worked hard and were reasonably contented. The broom dashers had become domesticated, although perhaps their spirit remained, as in the next extract from Mr. Herridge’s letter. This perhaps sums up the resilient country attitude of the people:

“We had eyes like cats. We could see in the dark. We were never afraid. It was nothing to go and fetch the Doctor, from Wokingham or Crowthorne, in the middle of the night, for the neighbours if they were ill. The only thing that used to make you jump was the foxes, when you came on them suddenly, but as a rule you could smell them first.”

By the 1960’s the school was divided into four classes, each of about twenty-five children. There were three teachers and the Headmaster or Headmistress took the top class. The smallest children, the five to seven year olds, were in the infants’ class. The next class was the transition, for seven to eight year olds. The lower junior’s class, corresponding to what is now called Years 3 and 4, contained eight and nine year olds. The upper juniors were aged between ten and eleven. There were four classrooms, the infant’s classroom also being used as a dinner hall. The school has always been a small, friendly society, traditional in teaching and discipline, yet informal and intimate in its atmosphere.

The Millenium Garden and JC2000:

Two major projects were planned to celebrate 2000 years since the birth of Christ. Firstly, JC2000 was a week when the children looked at various aspects of the life of Jesus. Activities included: painting, drama, dance, candle making, stained gl 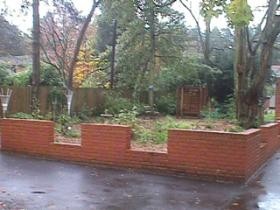 ass windows, collage and many other things.

As part of the Millennium celebrations also, was a project to develop the overgrown area, originally the Jubilee Garden, into a quiet area for the community to make use of. Due to amazing efforts from staff, governors, parents and, of course, the children, a Millennium Garden was created. This was officially opened by the Vicar of Saint Sebastian's Rev. Andrew Marsden  and the  Headteacher, Colin Rouse on Friday July 7th 2000.

A new entrance hall was created, in 1998, allowing the school to have a reception area for visitors and one of the classrooms was extended but this didn’t really address the overcrowding issue. So 3 years later a major planned extension was undertaken which has helped tremendously in alleviating the cramped conditions of the school.

The Opening of the New School Extension

The Rt. Reverend Dominic Walker, Bishop of Reading, opened the new school hall and administration block on Thursday 20th February 2003. Past Chairmen of Governors, Diocesan, LEA representatives along with parents and children celebrated this new beginning with an assembly. Many children took part by reading prayers and poems, singing songs and showing their art work. 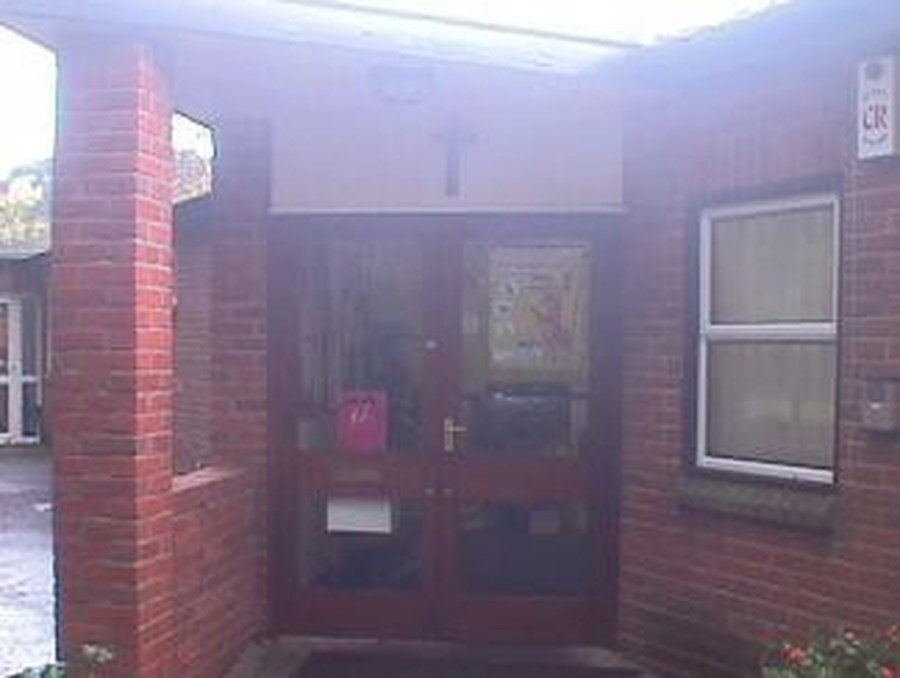 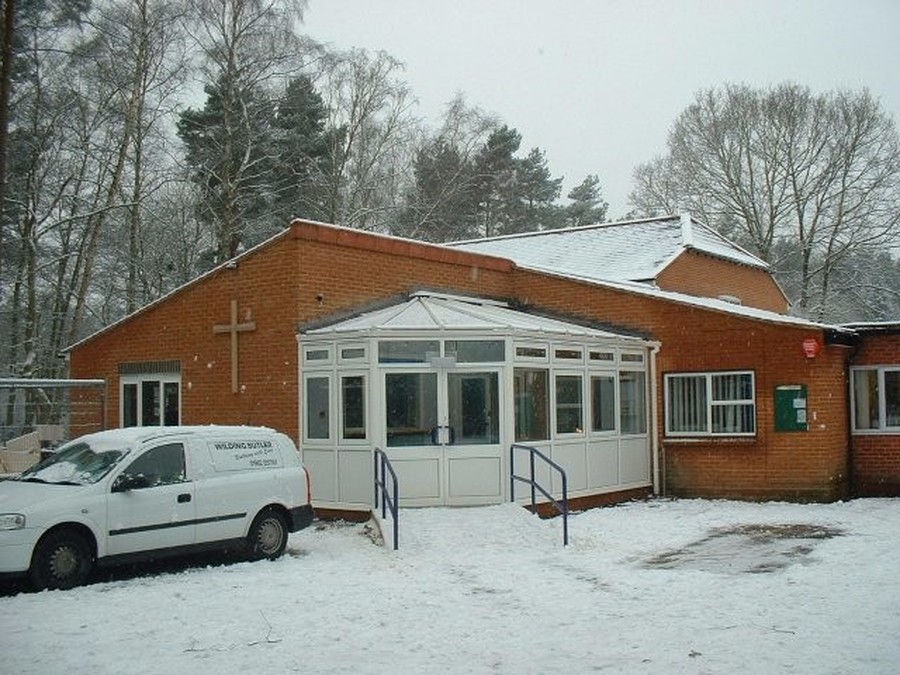 Certificates were given to the vicar for allowing us to use St Sebastian's church facilities, the Diocese for obtaining the funding and architect for his design. These were given by the eldest and youngest children in the school. 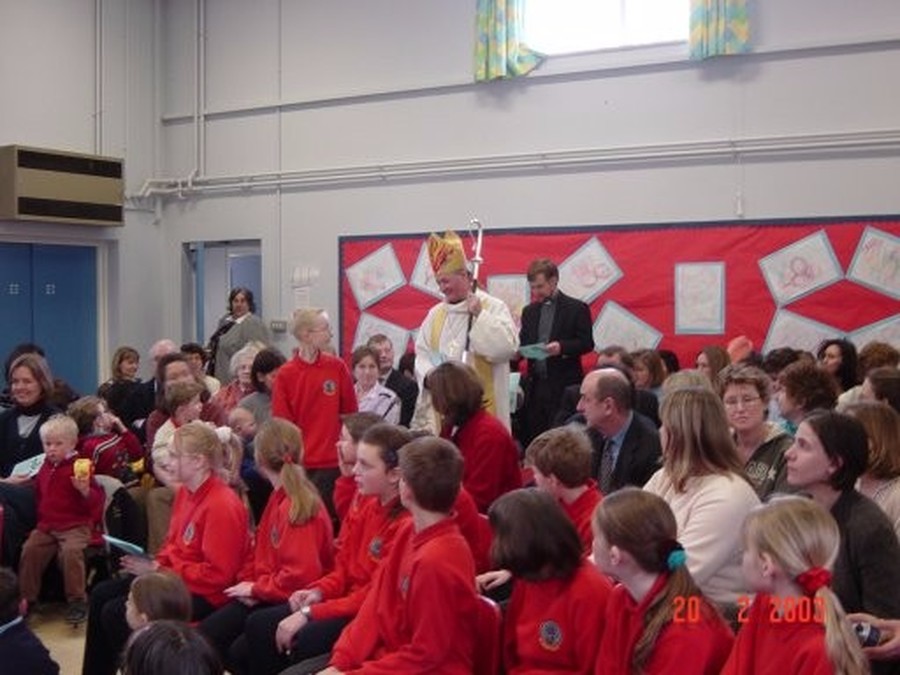 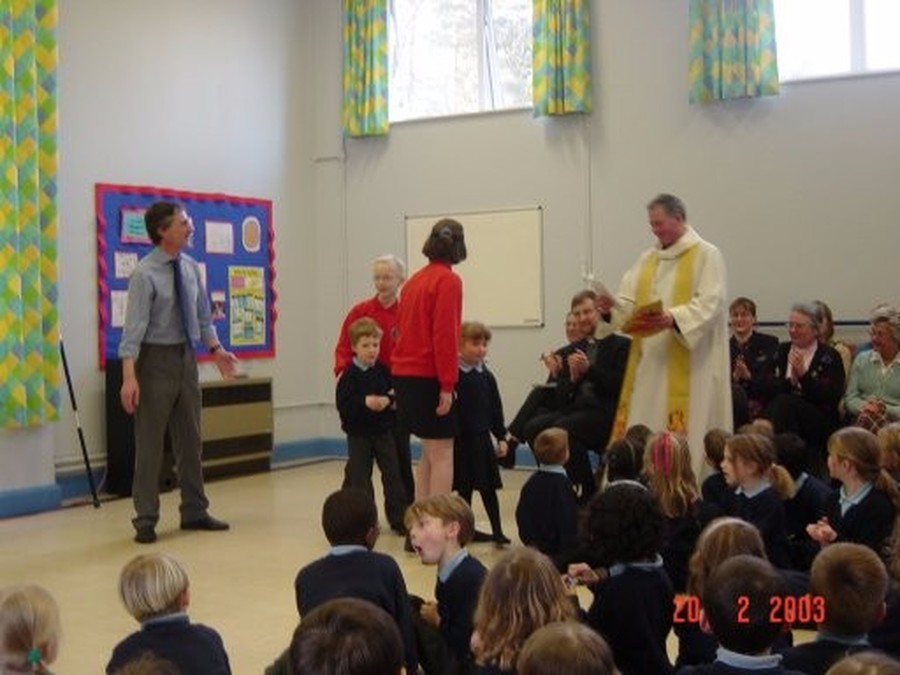 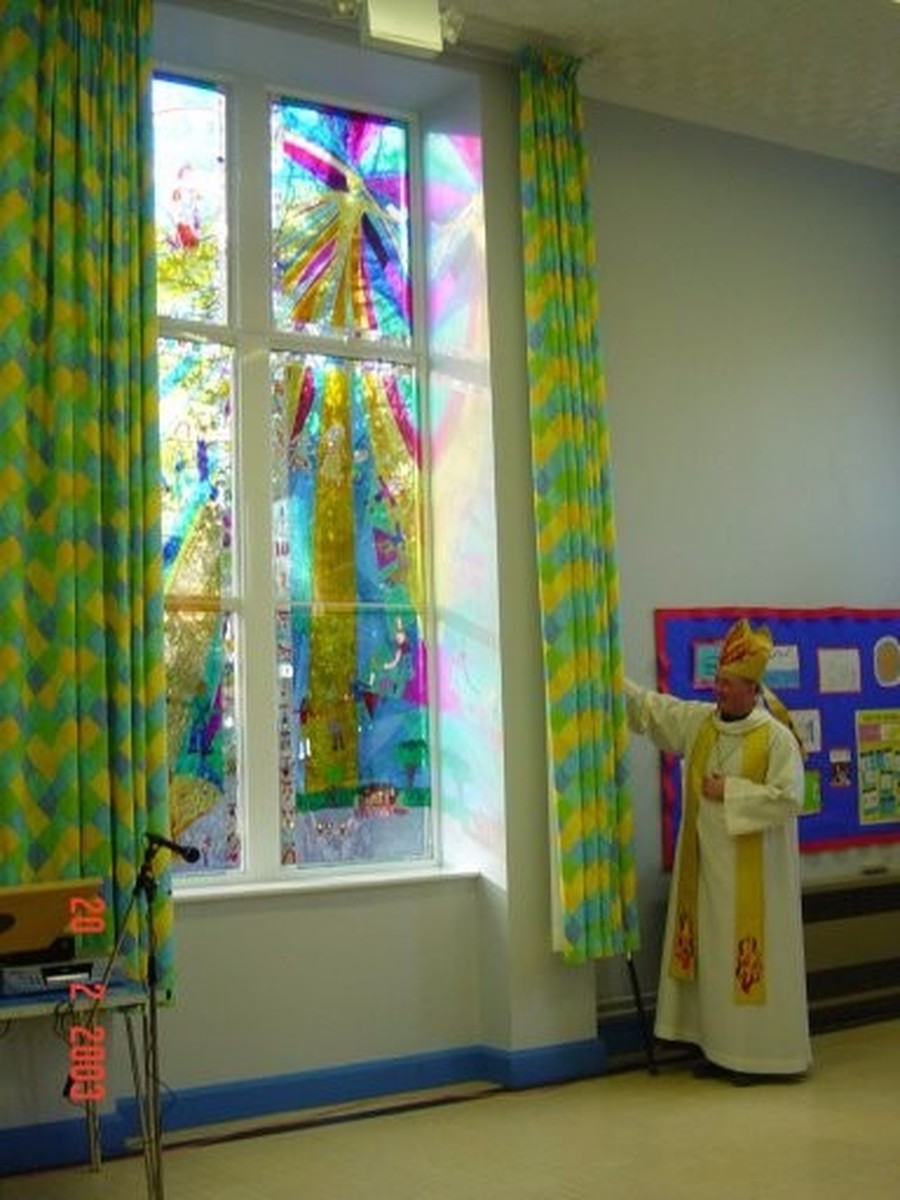 The Bishop unveiled and dedicated the stained glass window which all children contributed to during the schools JC 2002 week.  Further minor changes were made with further building work undertaken in 2010 to provide new infant toilet and cloakroom facilities and a dedicated children’s entrance.

Saint Sebastian’s School will continue to strive to give every child the very best educational experiences it can.

Does educating children really change that much? Literacy, Numeracy and Information Communications Technology may be here but it is worth remembering words that were written about the school, at the turn of the century:

“The school has always been a small, friendly society, traditional in teaching and discipline, yet informal and intimate in its atmosphere.”